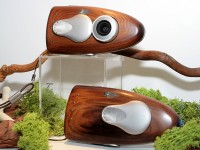 The Photokina 2006 held a very special surprise, the world's first digital camera made of.....wood! Olympus showed a fully working prototype of a digital camera with a wooden body. The Photokina prototype for was made of Japanese cypress wood that was compressed several times, the camera itself had a microscope(?) or microscopic(?) lens (probably refers to the tiny lens). By compressing the wood the body became harder and more resistant than that of polyresin. Also, if marketed, each camera would get a unique look. Some websites refer to this camera as a "3D camera" which it is of course not, the 3D refers to the method of how the pressure on the wood is applied from three sides. Olympus apparently also had plans to market other consumer electronics like beamers and IC-recorders in wood casings but it remained a concept.
(funny how no one ever bothered to write down some specs....)