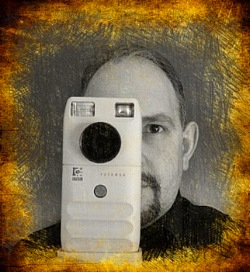 Before I started this project in 2010, it never ever occured to me to collect digital cameras let alone create a website about them. I knew nothing of the history of digital imaging. I didn't know what the first digital camera was or even how one worked. All that changed in 2008. By coincidence my first vintage digital camera fell into my hands. A Kodak DC25. The world's first digital camera with Compact Flash card slot. I found it intriguing and wanted to know more. I wanted to know everything. So I started digging, reading, researching. I found tons of inconsistencies on the internet, in books, in magazines. I checked every website that had a history section and they were basically all the same. For instance when you look up the Fairchild MV-101, you always get the same two or three results, for one it was the first commercially available CCD camera and secondly, it was used for product inspections at Procter & Gamble and thirdly some even claim it was the first digital camera. But it wasn't the first commercially available CCD camera and Procter & Gamble weren't by far the only ones utilizing this camera. The camera itself was sold by the dozens and used for numerous applications over the years. My growing collection and the incomplete resources in the internet sparked the idea of building a website about the history of digital imaging and the digital camera. A site that was not only as close to the truth as possible but also focused on accuracy. The first site that didn't use those decade old typos on the internet.

How to accomplish such a thing? By cobbling together whatever information I could find, verifying and cross-checking it. Primary sources were always manufacturers websites and press releases. But that wasn't enough. There were gaps, big gaps. I needed first hand information. For that I tried to start as early in time as possible, with the first presentation of a digital photography concept and digital camera design. Eugene F. Lally and his "Mosaic Guidance for Interplanetary Travel". Eugene has proven to be a good mentor and a good motivator too when I was about to give it all up because of personal setbacks. Unfortunately he died in July 2014. His information urged me to get in contact with Steven Sasson. Then Ken Parulski, Jim McGarvey, Kenneth Kendes, Jim Janesick, Motokazu Ohkawa and many others. After that I annoyed Olympus, Fuji, Pentax, Jenoptik, Sony, Toshiba, Megavision, the University of Calgary and other companies and institutions. This website is the culmination of these efforts. It's not finished but only the beginning. Since April 2015, I a member of the DGPh. As of 2016 our Digital Camera Museum has the most complete vintage still video and digital camera collection in the world with over 450 cameras, prototypes and rarities from the last century!