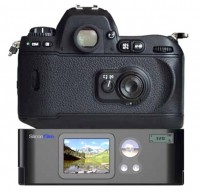 The second generation (e)Film cartridge also included the EFS10-SF. It too was announced at the Photokina 2002. Of course with the same concept photo as it's little brother the EFS4-SF. I don't know who came up with the idea of incorporating a 10 megapixel imaging sensor into a case the size of a film roll, attaching an LCD screen to it and giving it a compact flash card slot. Hello? Only expensive cameras like the Sigma SD9 for instance had a 10MP Foveon X3 chip which was a total novelty at that time. Most other digital cameras had 3-4 megapixels at that time. How was one going to build an e-film cartridge with a 10MP imager for $600?
Nevermind, all plans were canned after 2002.