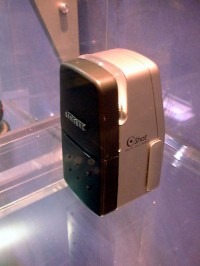 A rather unusual camera Samsung showed at the CeBIT 1998. The LCD screen could be switched from left to right side and would allow left or right handed operation. No other information available.

Update: Recently some interesting information has come to light. The C-Shot was actually the prototype for the Samsung SDC-007 that was marketed one year later in 1999.