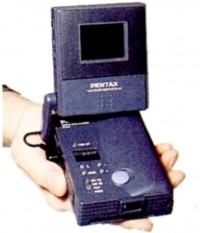 Pentax's first digital camera was very similar to that of the Ricoh RDC-1. It consisted out of two separate units, the camera itself and an attachable display. When separated one could take the lightweight compact camera along and point and shoot away, when at home one could then re-attach the display unit and review the taken pictures. Ricoh and Pentax were two entirely different companies back then, now Ricoh owns Pentax. Funny. Shown at PMA Spring'96 the camera underwent several improvements and modifications until it was marketed in it's final version in July, 1997. Ever since this camera was announced people misspelled it's name, the correct model name is EI-C90 (common typos are E1-C90 and EL-C90).