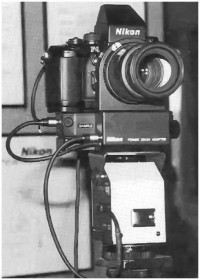 In 1988 a new prototype system accessory for the F4 was shown by Nikon and was called the TV Remote Finder System. By replacing the original finder with the TV Finder, the body was converted into one where remote viewing of the image (normally viewed through the finder) could instead be done on a TV screen. Much the same as live view on today's digital cameras. This wasn't new however, Nikon already experimented on this in 1962. From a distance of up to 100 meters, through the use of a hard wired portable remote control that was hand held, the camera's shutter could be remotely triggered allowing recording of the image to film. Other functions could be controlled remotely such as full zoom and focus control of the specially adapted lens. Inside the finder was a 8.8mm x 6.6mm CCD sensor that recorded up to 370 horizontal TV lines in monochrome. The images that were recorded looked similar to the ones made by other still video cameras at the time. Options were available that would allow recording of the still image to a vcr.

Special thanks to Ron Volmershausen for providing picture material and info