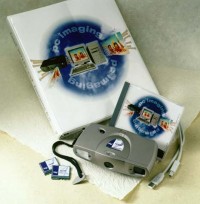 Intel built and designed a universal camera kit in 1997 and promoted it, alongside a good set of guidelines, to camera manufacturers. The intention was for camera manufacturers to built and distribute an affordable CMOS digital camera that could also be used as a true PC peripheral. The CMOS sensor's codename was EYE2. The Intel 971 PC Camera Kit was a complete DIY kit that could be used and modified by camera manufacturers as long as it was in accordance with Intel's guidelines. Samsung Digimax 30, Samsung Digimax 50 and Aztech MDC-180 are examples of cameras based on Intel's kit. Few only know this but Polaroid and Intel issued a press release on February, 5th, 1998 to develop and market a "Polaroid Portable PC Camera" in the second half of 1998. Polaroid intended to use most of Intel's kit but wanted to add Polaroid optics and Polaroid's Image Quality Assurance software. The Polaroid camera concept remained a concept unfortunately.

Although multiple camera manufacturers teamed up with Intel to market camera concepts based on the 971 PC camera kit, none of these concepts were ever realized or marketed to the public.