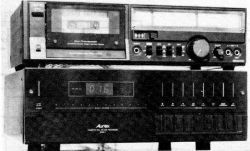 In 1985, Toshiba proposed a "Digital Still Picture Recorder" that utilized a regular audio cassette deck. By feeding signals from any TV camera, still video camera, videorecorder or TV receiver into the Aurex Digitizer, the image would be digitized and stored on digital cassettes. A total of 300 digital still pictures could be stored on such a tape (equal to 15MB!) in a resolution of 486x192 pixels.The audio deck used here is the Aurex PC-X66AD cassette deck. Aurex was a brand name by Toshiba. Underneath the tape deck is the Aurex digitizing unit.

The audio deck could be any brand and needed no modifications. The recording time for one picture would take up to 18 seconds in serial mode. The signal was digitized at 10.7 MHz with 8 bits per pixel and digitally compressed with the DPCM encoding technique and recorded on audio tapes. Reproduction signals fed from the tape are stored on a picture field memory installed in the system. Using audio cassettes it allowed for still images to be recorded as well as sounds.

Special thanks to Mr. Motokazu Ohkawa for IEEE papers and translation.