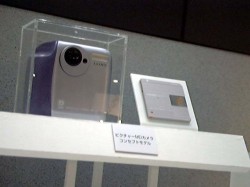 Sony introduced the MiniDisc Data in 1993 (see memory cards section). Since Sony was always VERY fond of their own storage media (Floppy Disc, Memory Stick, MiniDisc) it was no surprise that they introduced a digital camera in 1996 that could record images onto a MiniDisc. The specifications for a picture MD that allowed users to store colour images on a minidisc was already completed in 1994. Sharp had already successfully launched a MiniDisc camera that same year and Sony followed in 1997 with their Cybershot DSC-MD1 (failed to sell, now a highly sought-after gadget). Although the prime target of the MiniDisc were audio players, Sony somehow clinged to the idea and thought the MiniDisc would stand the test of time. In 2004 they announced a Hi-MD minidisc that could store 1GB of data. In 2004 Sony announced some consumer products for the Hi-MD and, oh boy, even thought of a digital camera to support this medium. (See 2004 Sony Hi-MD camera).

To support Sony in 1996, Konica developed an entire Picture MD system that consisted of a picture MD writer, picture MD editor, picture MD image scanner, picture MD viewer and CRT printer. More like a digitizing minilab. The equipment was supposed to be small, inexpensive and easy to use and became total vaporware.