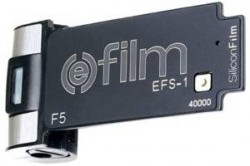 A neverending story of a misleading product that fooled the digital imaging industry for over 5 years. Patented in 1991, envisioned in 1997, showcased from 1998-2001 and allegedly ready to market in June, 2001. The (e)Film, the electronic film cartridge and something a lot of 35mm camera users had been waiting for. Let's see if I can get the story straight.

Imagek was a spun-off company of Irvine Sensors and in 1997 began electronic film-system development. After four years they renamed themselves to Silicon Films and intended to ship the first generation EFS-1 system in June, 2001. The EFS-1 system consisted of the (e)Film cartridge, an (e)Port for image transfer to PC's and an (e)Box for temporary bulk storage of images. The first gen EFS-1 was designed for Canon EOS and Nikon N-90/F90 bodies and were not interchangeable. A Canon (e)Film was incompatible with a Nikon (e)Film. The (e)Film could capture and store 24 images in full resolution (one image per sec.) and required no modifications to the SLR body. The (e)Port carrier provided a protective housing and a convenient interface for a laptop/PC or the storage module. The (e)Box was compatible with Compact Flash I/II cards and enabled the user to download images from the (e)Film cartridge while being "in the field".

In 2001 SiliconFilms even opened an online store for orders from the US and Canada. Technical difficulties (LOL) that weren't seen in the initial tests led to the fact that the EFS-1 was not shipped. The real reason was that Irvine Sensors stopped their financing because Silicon Films kept postponing shipping dates and finally totally failed to market anything, so they filed for Chapter 7 bankruptcy in Sept. of 2001.For further reading I higly recommend Olivier Duong's website f-stopeight.