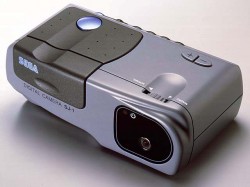 SEGA's only contribution to the digital camera market. Why I included it is fairly simple. I think that the one featured here is a prototype. I know there was a first generation model and then there was a second generation model which had a clip-on magnifier (both had built-in electronic viewfinders). But as far as I am concerned both of these cameras already had the big DIGIO logo in front.

The camera in picture one however does not. It just has the model name SEGA digital still camera SJ-1 imprinted. No logos, no nothing. Also the black lid from the smart media compartment differs in the two pictures as well as the lens. So to my understanding the camera in the first picture is a prototype which differs in a number of ways from the marketed version in picture two. Anyone care to comment?

In 1997 SEGA re-issued the DIGIO with a more stylish camera body, dubbed SEGA DIGIO HDC-1000A, B and C. The HDC-1000C for instance had a metallic pink body finish. The HDC-1000B is silver toned and the HDC-1000A a regular greyish. See the pictures. I managed to track down an impossible to find pink Sega Digio SJ-1 and compared it to my regular Sega Digio SJ-1. Apart from the color everything else, even the label underneath, is exactly the same. The box is also the same box as the 1996 SJ-1. They just put some extra labels on it indicating that this is a HDC-1000C. Same goes for my grey HDC-1000A. With the 1997 re-release, Sega included the clip-on magnifier.

p.s. There are rumours on the internet that a Sega Saturn compliant digital camera was released called the DIGIO II (see sega-saturn.net). This is not true as such a camera was never built and the picture of the DIGIO II is clearly faked.