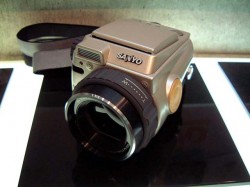 At the Mac World Expo 2000 exhibition, Sanyo demonstrated two early prototype digital cameras to support their newly introduced ID photo disk. The models were just mock-ups but the intention was clear that a digital camera had to follow that would use the photo disk. The thinner prototype was never marketed but the heavier prototype actually was re-designed and marketed the same year as the Sanyo IDC-1000Z(EX). The only camera ever to support the ID photo disk medium.