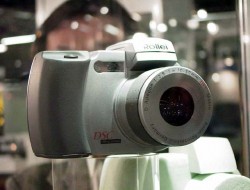 Rollei, a camera company from Brunswick, Germany showcased an early prototype of the Rollei d24 flex at the Photokina 1998 fair. The camera was more of a study for the FLEX series Rollei intended to market. From this series only the d7 flex and the d30 flex were actually marketed in 2000. The cameras were proudly labeled being the first DSLR's made in Germany. The camera did not compress the images and stored them uncompressed on a wide variety of memory cards (maybe that's what FLEX stands for?) The camera supported Smart Media, Compact Flash and PC Cards for storage. Despite being a true DSLR camera it had no interchangeable lenses. The official explanation was "for quality reasons no interchangeable lenses to avoid dust settling on the imaging sensor".