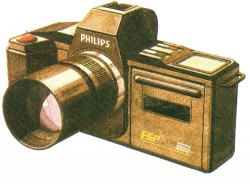 Bringing you another first. The Philips ESP series still video camera concept study. 10(!) years before Philips marketed the ESP-2, a group of 50 engineers, designers and scientists were already working on a still video camera concept. The cameras, already labeled "ESP" were designed around a 1/2" 0,18MP CCD manufactured by Philips. Back then they thought the cameras would be ready-for-market by 1989 at a retail price of roughly $1,000. The pictures are concept study drawings but wooden prototypes were actually designed.