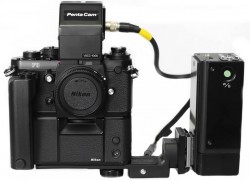 Here is a rarely seen special purpose camera. The Pentacam CVSC-1000. Introduced in early 1989 at the annual meeting of the American Society of Aesthetic Plastic Surgeons. The camera was aimed at medical photographers and was sort of a hybrid camera. It allowed to shoot still images on video as well as on 35mm film simultaneously. Based on a Nikon F3 SLR body where the camera`s prism had been replaced by a hi-res color video camera head. There was also a Camera Control Unit (CCU) attached to the side of the F3, equipped with motor drive and a portable power supply.

All Nikon lenses could be used with the unit. Output from the video camera head could be recorded by any format Videorecorder, with the video image being viewed simultaneously on a color monitor. When a still photograph was desired, the photographer could either trip the shutter via a standard cable release or a foot switch attached to the camera`s remote-control feature. The CVSC-1000 produced a 575-line NTSC composite video image. There was also talk of an improved version, the CVSC-1200 model, which featured 640-line resolution.
Special thanks to Ron Volmershausen for providing picture material and info