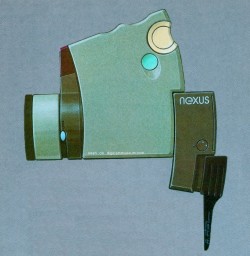 Andreas Fiol, a german designer, is well known for his outdoor SLR designs he made in the outgoing 1980's. It was the concept of a SLR camera that could easily be operated while wearing gloves. His concept studies were so interesting, innovative and popular that even Nikon approached him to do a study for them. He designed a small entry-level SLR camera with a matrix display for Nikon.

At the height of the still video camera era and whilst striving for the perfect camera design Andreas Fiol designed the Nexus. His prime goal was to move away from standard camera designs in black and white. He wanted still video cameras to be colorful and modular. His Nexus project showed a camera that had a colored housing, interchangeable lenses, modular elements that could be attached or detached and infrared flash strobe. The grip you see in the picture doubled as a Video Floppy disk drive and housed the power supply. The TTL viewer doubled as a status display. A modular camera created opportunities for different fields of use. The TTL viewer could me removed and replaced with a transceiver module, also the camera could be reduced in size by removing the disk drive. The disk drive could be carried around in a trouser pocket and could be connected with the camera via a cable. Another vision was to replace the disk drive with a cassette slot so the camera could double as a camcorder.