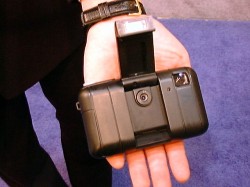 At PMA 1998, there was a small taiwanese company that showcased to low budget digital camera prototypes. The company's name was allegedly Formosa Digital. The second prototype had 2MB of internal memory and the rest was almost identical to the other prototpye. The prototype was later marketed by Largan as the Digital Lmini 350k Flip in late 1999.