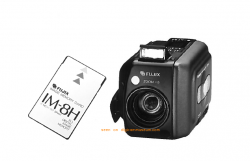 In 1991 Fuji showed their second prototype to the world at the Photokina 1990. It was a predecessor of the later marketed Fujix DS-100. Having listened to customer experiences with the DS-X, Fuji went on and produced this prototype. It had a larger LCD status display, 3x optical zoom, auto focussing and an external memory card slot.

Again I raise the question, so many visitors and no one took pictures?