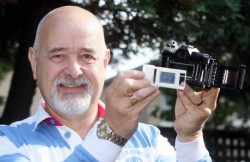 After Silicon Films totally failed to market the electronic film and all other hybrid cameras were either shelved or well... sucked, photography enthusiast and inventor James Jackson from England took matters into his own hands. Being a total analog camera savvy he wanted to keep on using them since he grew attached to them. So together with Sheffield Electronics and the local Fab Lab he started working in his own electronic film cartridge dubbed DigiPod.

He came up with the idea a few years ago and it stuck with him ever since. The Digipod had to be as versatile as possible in the ample space available. Therefore it had no hard memory and everything was saved to a micro SD card. The DigiPod should also sport a mini USB port for direct computer access and a built-in battery. Given the small size of the Pod a CMOS sensor will do the imaging. Right now it's still in prototype status. Maybe we'll finally see it happen after some 15 years of waiting?