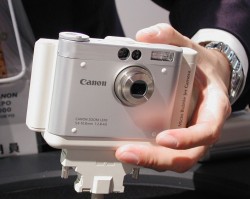 Especially for the Canon EXPO 2000 in Paris, Canon had a special website called "www.CanonExpo2000.com" (now defunct). Among tons and tons of information about upcoming technologies and products there was also a short presentation of a Micro Bubble Jet Camera. Print digital photos anytime and anywhere was the slogan. It could record images and sound and was basically a merger between the canon digital camera and their bubblejet ink printers technologies. The key concept was to put the functions of a photo lab in the palm of the user's hand.

The camera would imprint audio files in a 2D barcode at the bottom of printed picture. The idea was that when the barcode was scanned, one could play the audio file. A so-called "paper pack" would contain credit card sized pieces of photo paper for the camera. A print-out would take approx. 40 seconds. While Fuji had their PR21 (on Thermo-Autochrome-Basis) and Olympus/Polaroid their C-211 (on Polaroid instant film) this was the first digital camera body to incorporate ink jet printer technology. Although being a total novelty, the camera was never marketed.