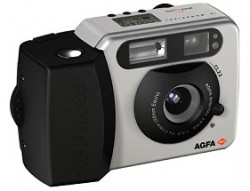 Ready to be shown at the Photokina 2000 this camera and it's twin CL20 were no novelties but had a built-in "Photo-Print" button that would load the images directly into the AGFAnet-Print-Service-Software. Before the Photokina, Agfa did a survey and because of the poor feedback the CL22 was cancelled even before it could see the lights of the Photokina fair. Instead an improved version, the CL34, was presented at the Photokina and later marketed.