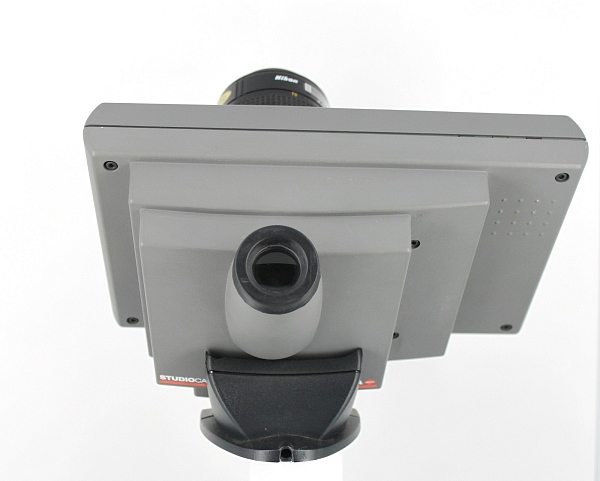 The StudioCam was Agfa's first digital camera together with the ActionCam. A fully featured, self-contained digital studio camera. Intended for photo studios and prepress environments. A nice feature was the possibility to rotate the CCD in order to take either landscape or portrait photos and when mounted on a copystand it even served as a 2D-scanner.  It had a SCSI-2 Port, a TTL viewfinder and a solid aluminium body. After the scene was composed the camera would take a preview shot, show it on the monitor so that corrections could be made until the final shot was taken. Basically it worked like a one-pass scanner with precision stepper motor.

The result was enormous. A 24-bit photo would be 50MB in size and a 36-bit photo even up to 100MB. A huge amount of data back then. Pre-scan time was 12 seconds and capturing time 1/200 - 1/30 seconds per line. Inside the camera was a trillinear color CCD with  3x 3648 elements. So patience was important. The camera was primarily shipped with Macintosh software.