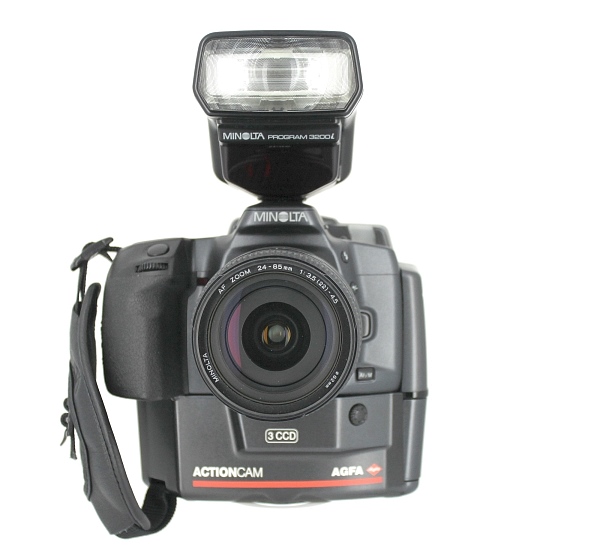 This camera surely was something unique. Marketed in 1995, when large sensors were expensive, Minolta went a different way and used three smaller sensors. Inside was a prism that would gerenate three light beams, for each sensor one. But not RGB as one might think but one red/blue one and two greens. For a simple reason, it would make the sensor more sensitive to green light which resulted in a higher ISO. The only cameras at the time that would achieve a similar ISO value were the Kodak DCS420 and DCS460 CIR models.

The entire camera was a joint venture between Agfa and Minolta. Minolta designed the hardware while Agfa contributed the soft- and firmware. Both companies marketed the camera under individual labels. Agfa marketed it as the ActionCam and Minolta as the RD-175. The sensors were 768x394 pixels each. These were the only cameras that could actually compete with the then dominating Kodak DCS series or the Nikon E2/Fujix DS-505 model.

The camera itself was a modified Minolta Maxxum 500si Super (Dynax 500si in Europe) with a digital back making it the world's lightest and smallest DSLR at the time. Handling the camera was very tricky as it operated on three different battery types and could only handle pre-formatted PC ATA cards (and by that I don't mean formatting inside the camera but on a PC!). Also the image output was an MDC file which is one of the RAW formats.