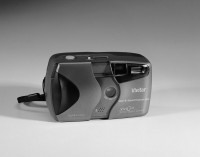 Built in 1996 and demonstrated at the PMA, New Orleans on 1997-02-20. Vivitar' first digital camera, made by SoundVision and aimed at professional and savvy PC-users. It was among the first OEM series digital cameras to feature the new CMOS sensor, manufactured in scotland. Officially announced by Vivitar just a month later on 1997-03-24. The camera actually received an innovations award from the PMA for newest and most promising imaging technology.

We are the first digital camera website to have this exklusive information:

Almost one year later, Vivitar re-issued the Vivicam 3000 on 1998-01-08. The improvements included an improved, fixed-focus, all-glass lens, the addition of BMP, TIFF and JPEG supported file formats and the packaged PhotoVista panorama software.

So two versions of this very rare camera exist. Mine is the 1998 version, still shrinkwrapped, with the improvements. I guess the original version of the camera may be unobtainable by now.