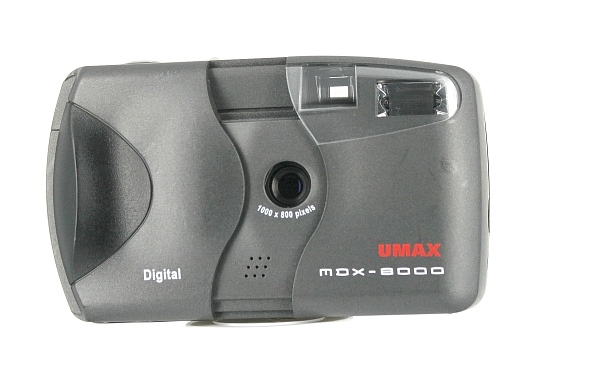 The Umax MDX-8000 was one of the first three digital cameras with a CMOS sensor. Sound Vision Inc. made this one and licensed it to other companies such as Vivitar and in this case Umax. The CMOS sensor came from Scotland by the way. The camera was marketed in 1997 and was well accepted.

The camera featured a built-in flash, live video mode, status LCD, self-timer and an optical viewfinder. Soundbits could be recorded as well. When tethered to a PC the shutter and compression rate could be manually adjusted. The only highlight for this camera was the status of being the first CMOS digital camera. Apart from that it was an oversized piece of plastic that devoured 6-AA batteries and had a lot of negatives. Because the camera had both a mechanical and electronic shutter it was common that the camera got confused by it and displayed a shutter error on the display. The internal memory was way to low to store a significant amount of images. Since the PC card was proprietary, the camera had no eject button and the camera had to be attached to a computer so the user could download images!