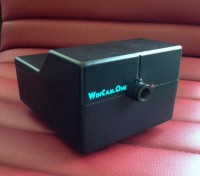 StarDot Technologies started building remote imaging solutions in 1994. In 1994 they built the WinCam.One which was introduced to the market in 1995. An all-in-one desktop imaging solution to scan slides, add images to an online portfolio or for close-up photography. The camera could provide a video stream with four frames(!) per second. Which in retrospect looks grizzly. The camera was tethered to the serial port of a PC or Notebook. Operating the camera was certainly not plug-and-play. For exampe, if one wanted to take macro photos closer than 1-inch, one had to loosen a set screw and manually focus. Also, focussing with the electronic viewfinder was kind of hard due to the low resolution of the tiny CCD. So it was adviced that plenty of light was available to get sharp pictures. The image taken could be stored as a BMP file or as an AVI video file. It took the camera 20 seconds to take and store a low resolution picture and 43 seconds for a high resolution picture. Pictures were scaled to 640x480 in resolution before stored.

As a bonus, StarDot provided a slide adapter in each box for digitizing transparencies. The $199 version was called WinCam.One BASIC and did not include a tripod or slide holder. For an additional $20 one could purchase a slide holder but don't expect something fancy there, the slide adapter was only an L-shaped piece of cheap plastic. Sorry StarDot. Even if there was some competition in the field, the WinCam.One had some advantages that other desktop cameras had not. For one, the WinCam.One was the only desktop digital camera that offered interchangeable lenses and cables. Also the price of just $199 was more than attractive.

StarDot offered a total of 5 interchangeable lenses for the WinCam.One. One Tele lens, one standard plus lens and three wide angle lenses. Fairly cheap small lenses that cost around $39 - $59. No picture material available though. By connecting an external modem to the camera it could even be used as a webcam or a remote surveillance camera.

The successor to the WinCam.One was WinCam.Live, a complete webcam solution introduced 1998. A big difference was the body color which had turned from black to white! After that StarDot has been successful with their NetCam solutions and even NASA is among their customers.