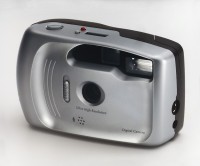 SoundVision Incorporated built this camera in 1997 as the successor to the previously marketed SVmini-2. The camera was praised on their website as "CMOS Active Pixel Sensor camera with the world's best resolution" offering a "unmatched combination between cost and high performance". SoundVision licensed their CMOS breadboard also to other companies like Vivitar and UMAX. The camrea devoured an incredible amount of 6 AA batteries and was equipped with an image processor chip from Texas Instrumentst. It was also possible to record sound bites. This model allowed interpolation which enhanced the resolution by 4 times the native resolution! At that time it was unheard of! Critics were 'not amused'.