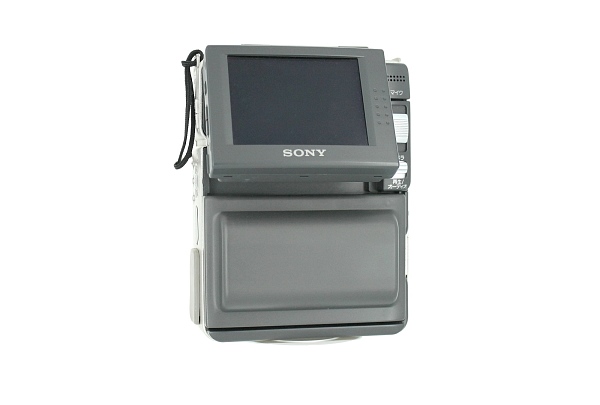 The Sony DSC-MD1 was first demonstrated at the World PC EXPO on 1997-10-06, announced officially 1997-12-01 and marketed in Japan only. Sony adopted their new Minidisc Data for this camera. One MD Data could therefore store up to 2,000 images in standard and 1,000 images in fine mode. Another novelty was the recording of stereo sound with each image. If used a total of 365 images and 40 minutes of stereo sound could be stored. In addition the camera could even be used as a standalone MD recorder!

The camera featured auto focus, a 3x zoom lens, 2.5" TFT LCD and was equipped with a speaker, an AV output terminal and audio input terminal. A wireless remote control was also supplied. Images could be transferred by serial cable or IrDA port. Amazingly, images could also be transferred between Sony's DSC-F3 digital camera and the DSC-MD1 by using the infrared port. Sony's initial plan was to not include the Li-Ion battery. The user had to buy it separately in a power kit. Then again, the original manual says that two batteries were included in the package. The battery NP-F100 could also be used with Sony camcorders and even be replaced with more powerful batteries (NP-F200, NP-F300).