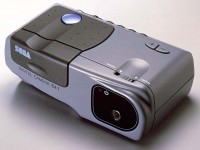 SEGA's first and only foray into the digital camera market announced 1996-11-24. Files on the card were stored in the .SJ1 format and could only be processed with the included software. Also, the camera would only power on when the SmartMedia card was inserted and secured.

When searching the web, a lot of inconsistencies about this camera can be found. Let's set that straight! The original SEGA Digio SJ-1 was announced by SEGA on 1996-09-11 and not in 1995. It had a blue-ish body color and came without the clip-on magnifier. I emphasized magnifier because almost everyone claims this to be a viewfinder which is not true because the camera had a built-in cyber display LCD viewfinder (an optical viewfinder never existed). In 1997 SEGA decided to revamp this model and offered it in three different versions:

Besides, there was no SEGA DIGIO II as many websites claim. DIGIO stands for DIGITAL and IO which means myself. So the slogan was to express yourself with a digital camera. Future plans to hook the camera up with the Sega Saturn were abandoned.