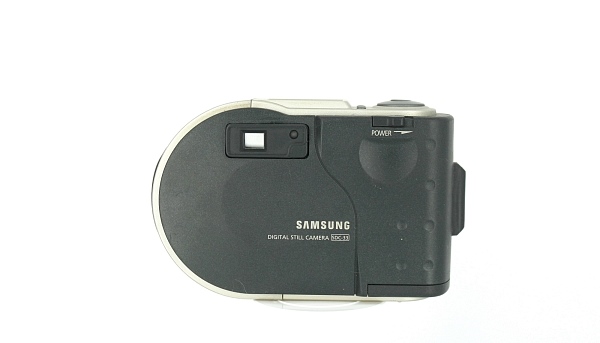 The Samsung SDC-33 was Samsung's entry in the digital camera market, announced in 1997 and unveiled at the Computex Taipei '97 and World PC Expo '97. As you can see in my prototypes & rarities section, there is some confusion about the different model names. A SDC-30/SDC-35 was apparently also available and identical to the SDC-33 but maybe in a different body color? I don't know. There was a brown-colored SDC-33 and a black-colored SDC-33. I have never seen a brown-colored SDC-33 in real life though.

A simple point-and-shoot digital camera with an optical viewfinder, serial port, a status screen, DC input jack, self-timer, two quality modes and that was that. On the downside the camera did not have a flash strobe, no LCD screen, no automatic white balancing, no external memory and worst of all, it still had to be powered up by four AA-batteries! Another bummer was the cheap rubber coating that covered almost 50% of the camera. The rubber became sticky over time. A common phenomenon with vintage (digital) cameras.