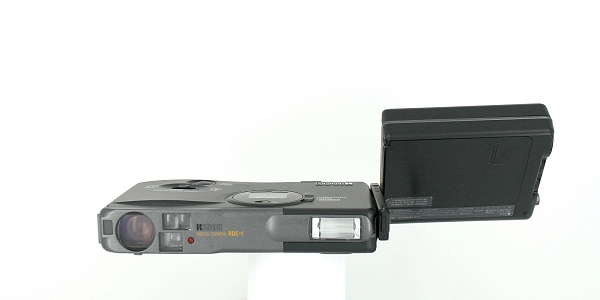 The Ricoh RDC-1 was Ricoh's first digital camera on the market and announced 1995-06-01 in Japan and 1995-07-01 to the rest of the world. It was an innovative piece of work because it was the first digital camera that allowed video recording. Before we go any deeper I am going to let you in on a little secret. All Ricoh digital cameras marketed before the RDC-5000 were called DC in Japan and RDC in the rest of the world. So the RDC-1 and RDC-2 for instance were labeled DC-1 and DC-2 in Japan.

The Ricoh RDC-1 was shown at Comdex '95 and at the end of the fair won the "Best of Comdex" award. Before that Ricoh employees attended the Telecom '95 conference and shot the entire conference with the RDC-1! With pictures, video and sound. Few people know that Ricoh offered a wide converter lens (DW-1) for the RDC-1 and DC-1S which allowed a wide angle shot equivalent to the one of a 35mm camera.

The RDC-1 was quite a modular and appealing camera as it consisted of a multitude of different modules. Here is an overview of what was available: