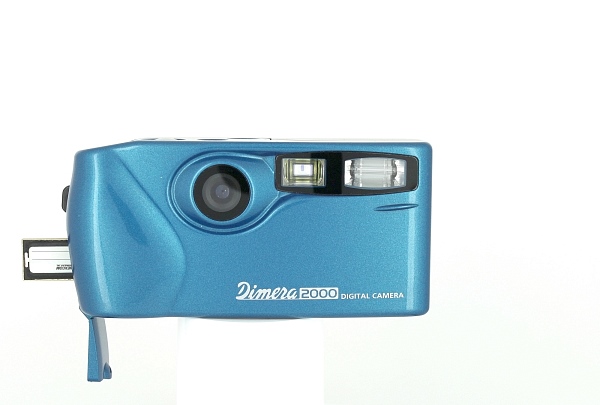 Relisys is not a digital camera manufacturer. It is the brand name of a large Taiwanese company known as the TECO group. Several digital cameras have been released under the Dimera brand name. This is actually the first one, marketed in 1997. A small, hardly noticeable digital camera in the lo-res sector. Sold for around $150 - $199. This one was not licensed to Mustek but it's successor, the 3500, was. This camera used the serial flash module. It was actually such a cheap camera that in 1998, Serif (an outlet store) offered this camera bundled with the GO DIGITAL PHOTO PAK software for a measily $149!

The camera ran on one 3V lithium battery (CR123) and had a dual iris lens and built-in flash. Three status LEDs informed the user about the operations of the camera. The camera recorded pictures in two modes, normal (320x240) and fine (640x480). The supplied Serial Flash Memory Module could store 10 pictures in fine mode. Other specifications were TTL CCD sensor metering, a focus distance of 40cm to infinity and the option to use an external AC adapter.

Not many know that the Relisys Dimera 2000 was available in two editions. The more common edition was called 'silver fox' and the rare and very limited colored edition was 'blue rock'. You can see it above in the 360° shot with the serial flash memory module sticking out.