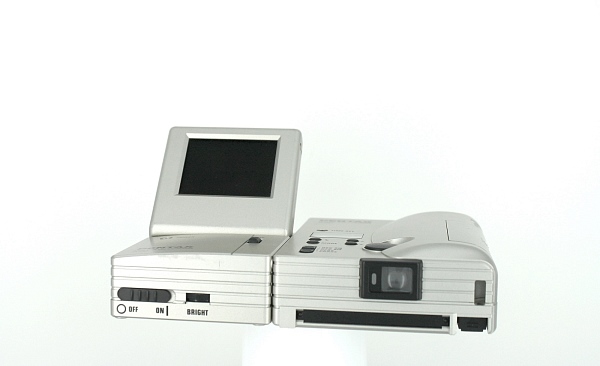 Pentax's first digital camera was very similar to that of the Ricoh RDC-1. It consisted out of two separate units, the camera itself and an attachable display. When separated one could take the lightweight compact camera along and point and shoot away, when at home one could then re-attach the display unit and review the taken pictures. Ricoh and Pentax were two entirely different companies back then, now Ricoh owns Pentax. Funny. Shown as a prototype at the PMA Spring '96 and Photokina 1996 fairs, the camera underwent several improvements and modifications until it was announced at the PMA 1997 show in February and marketed in it's final version in July 1997. Ever since this camera was announced, people tend to misspell it's name, the correct model name is EI-C90 (common typos are E1-C90 and EL-C90).

While researching I came across a picture of a black Pentax EI-C90. All EI-C90's I ever encountered were silver colored. I know that the early prototypes were black but this is a picture of the final version. So I contacted Pentax and asked them if they knew anything about it. The only answer I got was that Pentax never sold a black-colored EI-C90 in Europe. Which leads me to the conclusion that this must either be an overseas model (Japan or USA) or a prototype in it's final stage. If anyone knows more about it please let me know.