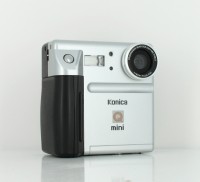 The Konica Q-Mini was not made by Konica but by Panasonic and was on display at Comdex Fall 1996 as the Panasonic VZ-XP1. The Q-Mini could later be seen at the MacWorld Expo in Tokyo 1997. The camera had a built-in flash with red-eye reduction, automatic white balance, macro mode, programmable automatic exposure and compact flash slot. Two things made this camera special, first one was the display that could be tilted a little bit and the second thing was that the camera could be powered by three sources. Regular batteries, a dedicated Ni-Cd battery and AC adapter.

The Konica Q-Mini is an OEM model and identical to the Canon PowerShot 350 and the Panasonic NV-DCF1. In the above gallery you can see all three OEM models.