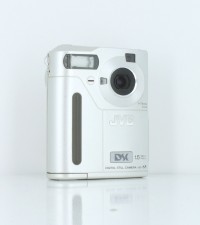 The JVC GC-S5 was announced 1998-02-03 and the follow-up of the GC-S1. A totally different camera altogether and a Fujifilm MX-700 clone. Why didn't JVC stay with the GC-S1 design and improve it instead of licensing an OEM model from another manufacturer? We don't know. The JVC GC-S5 was completely identical to the Fujifilm MX-700 and Leica Digilux so I won't repeat their details here. The only difference was the really bright silver body color of the JVC.

JVC did market a few follow-up models after the turn of the century, like the GC-X1, GC-X3, GC-A50 and GC-A70 but with moderate success and eventually canned their short-lived digital camera line.