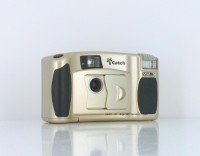 This is a rather unknown Polaroid PDC-640 clone. As with the Agfa ePhoto 780c this one also appeared in a colored body. This was typical for digital cameras that came out in 1999. Before that it was mostly black and silver only. There are no details about this camera on the internet or in any magazine so there ain't a lot to tell. It was most likely made or marketed by a company called Sunplus Technology Co. Ltd. of Taiwan.