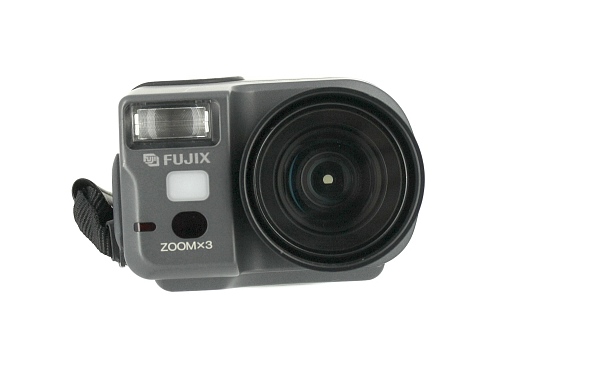 Not many know this but there was actually a patent for this camera with the simple title "Memory Card Camera". From the patent arose one of the earliest prosumer digital cameras of all time. The Fujix DS-100 Memory Card Camera. It was something that both consumers and professionals could handle without paying the price of a professional system. Launched in 1991 in Japan and from 1992 on in the US.

As we've learned, the DS-100 was a result of customer feedback that came from the DS-X. It now featured an LCD display, auto focus, video out jack and 3x optical zoom. Having implemented the first SRAM cards it was no suprise that this camera also featured external storage capabilities. The camera was quite a success and won a Good Design Award in 1992.

The camera was able to take 21 pictures in economic mode on a 1MB SRAM card (three compression methods were available). Images could be take one frame at a time or in continuous mode at 3 frames per second. Also for the first time a memory card reader was presented. The Fujix DP-100. A midi-tower sized card processor that worked with both IBM PC and Macintosh via SCSI cable. On the other hand the camera could be hooked up directly to a TV set to review images. Please note that this camera, as well as it's successor, only worked with the proprietary Fujix iM SRAM memory cards. Although other SRAM cards were available, i.e. from Toshiba, but there were slightly thicker and therefore incompatible.

Trivia:
Did you know that Fuji used the exact same battery pack and battery charger from the Fujix ES-30TW still video camera for the Fujix DS-100?