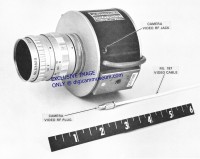 I only include this one because it is still something people search for. Why? Because in 1996 something happened that changed the way we look at this camera forever. Until 1996 basically no one knew about this model. No wonder because it was an expensive camera for industrial, medical and military applications. In 1996, Ken W. White, then president of Visual Sense Systems published a conference keynote on the internet. In this keynote he claimed that in 1976 he was working for Procter and Gamble and used this specific camera for product inspections. Simply because other cameras of that time couldn't handle the job. So far not a problem at all. Then some dude from some digital camera history site came along, found this information and posted it on his website as being "The first commercial CCD camera with a 100x100 resolution from 1976". This is were the problems began. Because it was mentioned along with all other vintage digital cameras and because it was one of the first digital camera history sites, the rest of the world naturally spread this information to every corner of the internet. No one ever did some research towards this camera, no, everyone believed that this was the first commcercially available CCD camera from 1976. Period. This was even printed in the "Focal Encyclopedia of Photography" and every single digital camera timeline you can find.

For over a decade this was believed to be the status quo, until my website went online. As it turned out it wasn't built or invented in 1976, like 99% of all worldwide sources claim, but much earlier. This is what happens when unverified information goes viral. I think it will be nearly impossible to erase this decade old blunder. People are gullible and rather believe what the majority of Google site search results deliver. It's a statistic fact. I can only try with my website to right the wrongs but I can't change people. Sorry if this appears rude but the truth always hurts.

I already discussed the MV-101 in detail so there is nothing much to add here. It was never a 'digital camera' in common device terms and never sold to regular consumers. It was a solid-state TV camera intended for industrial, medical, military and scientific purposes. I own one of the very few surviving manuals of this camera and I can say with a 100% certainty that this was an analogue camera, not digital as it did not have a built-in A/D converter! One of the few accounts of MV-101 users was the above mentioned keynote of Ken W. White, the 1975 NY tech fair and the underwater experiments of Emory Kristof in 1979. By the way, here is the link that started all the troubles about the MV-101:

The year the camera was first mentioned is 1973, there's no doubt in my mind. In 1974 a magazine called Videoplayer wrote the following about the MV-101: 'Fairchild Camera's charge coupled device (CCD) video camera has been on the market for over a year'. The MV-101 featured a resolution of 75 TV lines, a bandwith of 1MHz and could capture 9 gray shades. The camera could operate up to 100 ft. away from the TV receiver, which was pretty impressive back then, and could operate with most closed-circuit television receivers. The camera had a c-mount bayonet and came equipped with a 25mm lens. It's successor was the popular MV-201.

Above you can see, for the first time ever, a world exclusive image of the Fairchild MV-101. This image is unavailable elsewhere on the world wide web and exclusive to digitalkameramuseum.de.