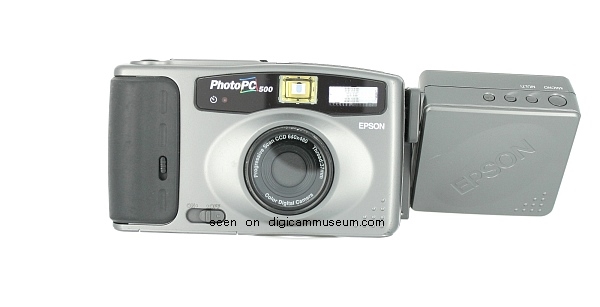 The Epson PhotoPC 500 was announced 1996-11-07. It was smaller than it's predecessor, the Epson PhotoPC and featured the then new Epson ColorTrue processing system that allowed to capture up to 30 high quality in 24 bit color at a resolution of 640x480 pixel. An interesting but rather unknown feature was the possibility to add an external monitor called Epson Photo View Color LCD Monitor. It allowed the user to preview, playback and take close-up pictures. The monitor took another $200 out of your wallet.

For this camera concept, Epson introduced the term Colorio in Japan (Color Input Output). Therefore this camera was called Colorio CP-200 over there. Although adding an additional monitor was a neat idea, the monitor itself was bulky and when attached rather "wobbly". Also, handling the camera became difficult and carrying it around was even worse since Epson did not offer any travel bags for both items.