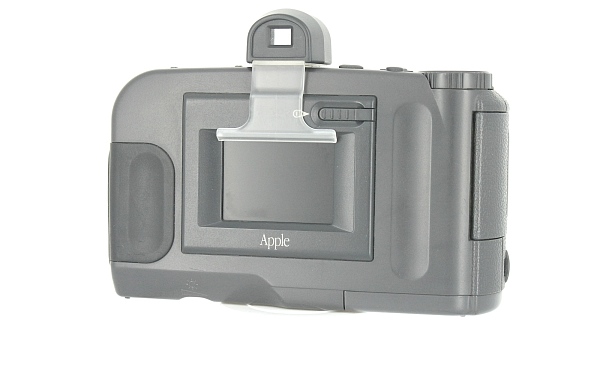 The Apple QuickTake 200 was the last of the QuickTake series and for the first time not based on a Kodak sensor. Apple teamed up with Fujifilm for this one. The reason was simple. A survey was held and QuickTake 100 users demanded a more compact digital camera with TFT screen and removable flash cards. The Quick Take 200 was also the last of the QuickTake series and introduced by Gil Amelio himself at the MacWorld Expo in February, 1997. Steve Jobs canned the digital camera line after he returned to Apple in 1997. In Japan, Fujifilm marketed these cameras under the label Clip-it. Although everyone claims the Apple QuickTake 200 to be based on the DS-7 model it was actually based on the more unknown DS-8 model. The DS-8 was a slightly revamped version of the DS-7 and sported better image compression and a clip-on optical viewfinder. The QuickTake 200 had better handling with Macintosh computers, supported PICT and TIFF and the pictograms on the jog dial matched those of the Macintosh operating system.The clip-on optical viewfinder that came with the DS-8 and the QT 200 could also be used on the DS-7 of course.

One big attempt Apple made to promote the QuickTake cameras was when they used the QuickTake technology to take photos from a Metallica concert and post them every 20-30 seconds on the Metallica website. This was achieved by using a modem. Apple also transmitted the concert in QuickTime and VR video streams in a cybercast.