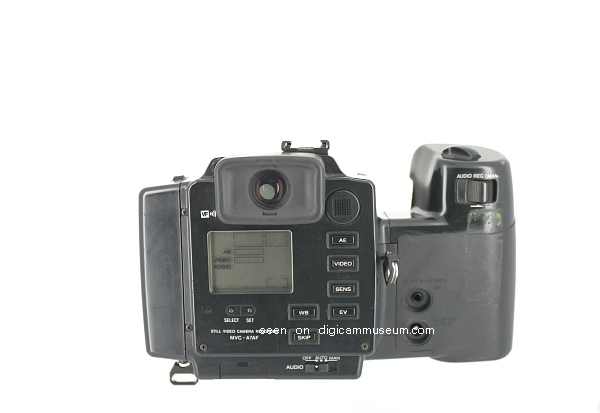 The Sony ProMavica MVC-A7AF was Sony's first still video camera ever marketed and the second still video camera on the market. Also the first of the ProMavica series. Despite popular belief the camera was not marketed in 1986 but in August of 1987. When this camera came out in 1987 it was often simply referred to as the Sony ProMavica in the press. Almost no-one used the model name MVC-A7AF. Also the only SV camera to sport a powerful 6x zoom lens. It was the first SVC that could record audio clips up to 9.6 seconds per frame. It was even possible to record video in field mode. Field- and frame mode recording, built-in autofocus and flash hotshoe for a dedicated flash strobe (MFL-30).

Also introduced were a recorder/playback unit (MVR-A770) and a transmission device (SFV-1000). To prolong the battery life one could also connect the camera to Sony's NP-4000 rechargeable battery pack. As with many SVC of that time, this camera too won a Good Design Award in 1987. Although the MVC-A7AF looked like an SLR, it's lens was not interchangeable!

The camera took 6 AA-batteries and had a connector for an external microphone. Programmed AE, automatic white balance and an TTL optical viewfinder. In 1981 Sony contracted a marketing research company to find out what the consumer wanted. The result led to the construction of this camera. To encourage adoption of the camera Sony distributed 150 prototypes to large newspapers and magazine publishers (source: Marketing Management: Text and Cases byS.H.H. Kazmi).