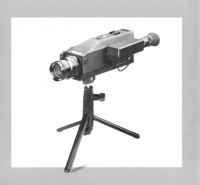 The Polaroid 8801 prototype camera was demonstrated in 1988 at Polaroid's annual stockholders' meeting. Actually, the first time Polaroid talked about such a camera was in February 1987 and made Polaroid's stock boost!  The 8801 is a modular camera that stores images on magnetic tape. Polaroid deliberately avoided the Video Floppy Disk because of it's limitations concerning resolution. The camera could be attached to a control unit that did A/D and D/A conversion as well as digital enhancement/processing.

The CCD used in the camera is a frame transfer type imager with two field memories using virtual phase technology and was made by Texas Instruments. The camera had three
modes of operation. During viewing, the scene may be seen in live video through the electronic
viewfinder. When the desired still image is viewed and a button depressed, a high resolution still
picture is captured. The third mode available is the burst mode where continuous high resolution
pictures are captured at 2 frames per second. Pictures could be taken and stored on tape in
the field by use of a battery pack, camera head, and a portable SVHS tape recorder.

The image could be printed out on a Polaroid printer (with type 53/55 film) or stored permanently in analog form on a 1/2" videotape. A regular S-VHS tape could therefore hold almost 14,000 images. Images could also be sent via modem or to a computer for digital storage or enhancement or stored digitally on optical disks. The camera set that consisted of the camera, a control unit and a printer was intended for industrial use, security, analysis and journalistic field photography. The official name for the system was Polaroid 8801 CCD Still/Video System. First deliveries of the system were made in September 1988. To the right you can see an actual picture recorded with this camera.