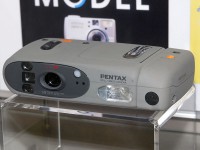 The Pentax EI-C70 was a direct follow-up of the 1988 prototype. Although completely finished in design, the camera was never marketed. It featured a built-in flash, zoom lens and active IR autofocus. A special accessoire called the EI-A70 could be attached to the camera which would then allow for 10 - 20 seconds of audio recording. Several website attached the year 1993 to this camera but I can't seem to wrap my head around it.