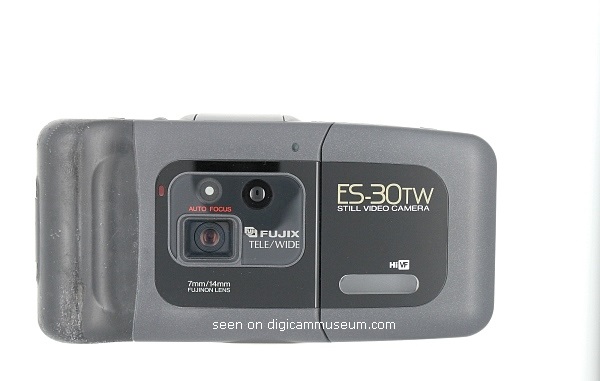 The Fujix ES-30TW did not look like it's predecessor's anymore. It looked more like a conventional 35mm camera. It was marketed only in Japan. Fujix announced it's sale in December 1989 (https://www.fujifilm.co.jp/history/1985.html). The TW stood for Tele and Wide, the dual lens inside the camera. Another specialty was that the Video Floppy Disk was not inserted in the back like most other cameras but in the front. The camera featured autofocus, status display, Hi-Band recording, field- and frame recording mode, autoexposure and an edit feature. Recording of up to 15 images per second was possible.

The camera along with it's video adaptor unit won a Good Design Award in 1990. The camera was available with the following equipment:

Here is an interesting fact not many of you know. The first batch of these cameras had a black rubber grip on the left side of the camera. This grip, like most cameras, tended to get gooey and sticky over time. Fujix reacted to this and replaced the rubber grip with a plastic part that actually matched the rest of the camery body in later versions of this camera. You can see this in the pictures above very clearly. The 360° view for instance features the old version of the camera with the sticky rubber, the still image above shows the newer version, in a slightly darker tone with a plastic grip and no rubber anymore.