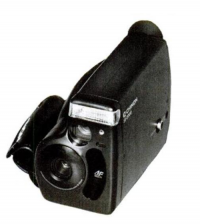 The Chinon S-2000 was based on the Chinon 5001 handyzoom 35mm film camera. Although they look nothing alike, some of it's components were used for the still video camera. As with many other still video cameras of that time, the S-2000 resembled more a camcorder than a film camera. It featured 2x zoom, multi infrared autofocus, 16-step autofocus system. The S-2000 could shoot 10 frames per second in hi-band mode.