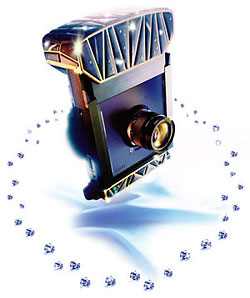 Sources claim the camera was introduced and sold at the 1996 Photokina but this would be contradicting the 50 year anniversary in 1998. So it is more likely the camera was sold in 1998. The selling price was allegedly 60,000 euros for the body only, without a digital back. The israeli LEAF company provided two digital backs for the camera, one for 24,000 euros (DCB-LV, 4MP) and one for 30,000 euros (Volare, 6MP). Without tax of course. It is very unlikely that any of these five models will ever surface in an auction but we know that at least one of them was sold to the swiss camera museum in Vevey. They also own the copyright for the picture I am using. Further down in the article you can also see a PR shot of the camera from Sinar directly.
This camera is so rare that it surpasses every other digital camera or still video camera in scarcity and value. It's now the new holy grail for all collectors.