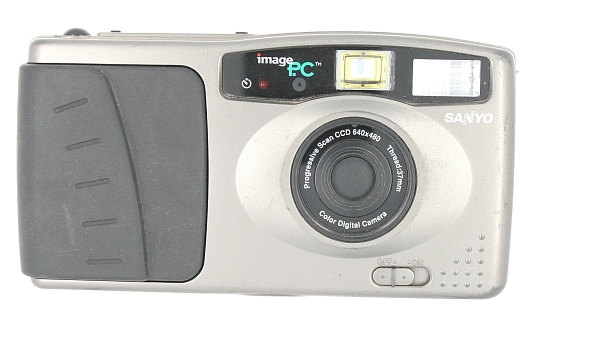 This particular camera was indeed made by Sanyo and then licensed to Epson and Sierra Imaging Inc. Sierra Imaging Inc. unveiled their camera at the Fall Comdex '95. Interesting because Sanyo built it, but a licensee unveiled it first. The camera was very bulky but did not feature an LCD screen. The camera could also store the pictures in it's internal memory for the duration of one year without any batteries. The camera had a 37mm thread, allowing the user to use a variety of lenses and filters.

The basic concept of the camera was to give the user a complete imaging solution. From taking snapshots to printing and posting them on the internet. Although the camera did not feature any technical innovations, it was the first digital camera for Sanyo, Epson and Sierra Imaging. It was a simple but efficient and easy to use point-and-shoot digital camera that allowed the user to process photos taken in an easy way.

Another thing, not many know this because it ain't documented in the manual but when you take off the battery compartment cover you can see two clips, with those clips you can take off another cover and reveal a memory card slot where a proprietary Sanyo memory module would fit. The so-called PhotoSpan memory module. This vaporware memory module was a marketing desaster. An expansion module of 2MB was as expensive as the camera itself and a 4MB module even more expensive than the camera. Also, there were only 4 digital cameras in the world that used this module. No wonder it didn't sell and was taken off the market pretty fast.