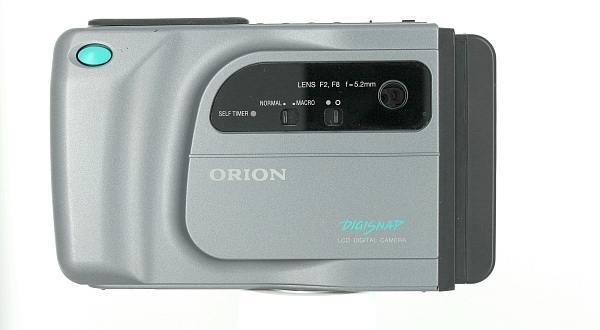 I am particularly pleased to write about this digital camera gem. The camera was introduced to the market in 1996 by a company called Orion. Orion was a german supplier of audio and video consumer products. They didn't have anything to do with digital cameras or cameras at all! They marketed some analog video cameras though. All of a sudden the model DigiSnap 21 appeared. Unannounced and unlike any other digital camera of that time.

I still don't know who the OEM supplier is. Orion has been bought up in the mean time. The brand still exists but is now owned and operated by a chinese company. The camera therefore is an outstanding product, not in a technical sense but because of its uniqueness. The camera was operated by a regular video camera battery that could easily be replaced. It had a video jack and a serial port. At the back there was a large 3" TFT screen of good quality without any jitter or delay when using it as a viewfinder. Probably the only digital camera back then with such a large TFT screen. It also had a slow shutter function, macro mode, self timer and white balance. Another interesting fact is that the camera was built in Japan, so it is no OEM model from the popular taiwanese OEM manufacturers. I guess I need to open it up to find out who built it