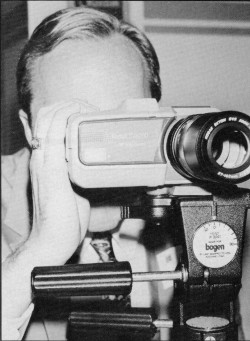 Shown at a Kodak System demonstration in New York. Kodak's first step into the still video market. The setup consisted of a multidisk recorder/player (SV7400 and SV7500), a color video printer (SV6500 and SV6550), a color monitor (SV1300) and a video transceiver (SV9600). Basically a product line to store, view, record, play, print and manipulate still images. For the entire system the estimated price ranged from $10,000 to $25,000! All they lacked was a still video camera. Until now! Kodak successfully demonstrated the SV8200 at the system demo in a hotel in NY in 1987. The camera featured automatic white balance, electronic b/w viewfinder, focus indicator and automatic exposure. The camera was never marketed.

Little is known about this still video camera prototype. It appeared to be a one-off prototype with an unknown CCD imaging sensor that was available before the Kodak E3 came out. Also there have been reports that the controls of the camera were top mounted (the controls of it's follow-up model SV8300 are rear mounted). Another novelty was that the camera did not use a conventional optical viewfinder but instead an electronic black and white viewfinder that presented the image of the scene on a miniature cathode-ray tube.